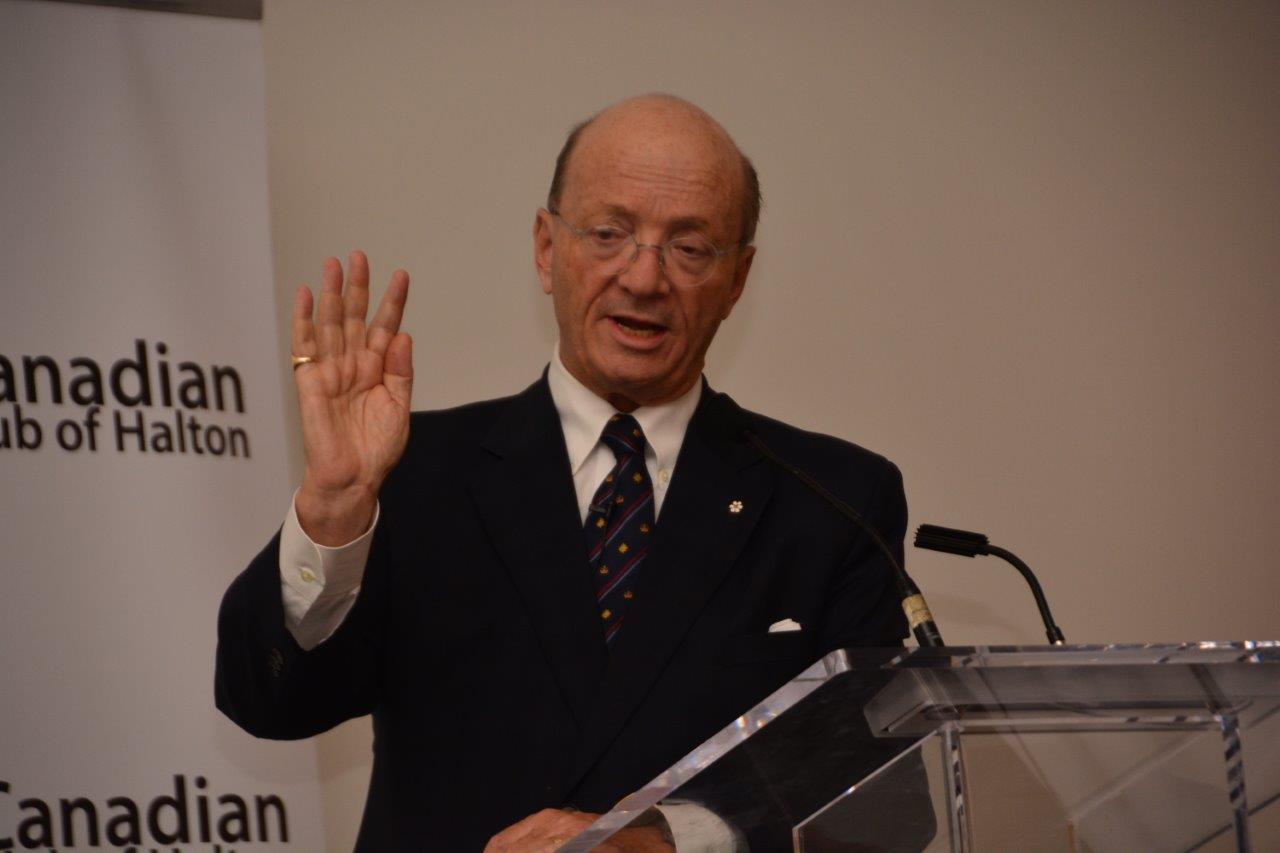 Mr. Segal was eloquent, witty and extremely knowledgeable as he sketched an insider’s view of Canada’s Global Future with remarks titled “Understanding the Mix Between Global Security & Economic Opportunity World-Wide”.

The Hon. Hugh Segal, OC, OOnt, Master of Massey College, past member of the Senate of Canada, was the guest speaker at a well-attended Canadian Club of Halton dinner on March 23, 2017. Mr. Segal was eloquent, witty and extremely knowledgeable as he sketched an insider’s view of Canada’s Global Future with remarks titled “Understanding the Mix Between Global Security & Economic Opportunity World-Wide”.

Mr. Segal has worked with top officials of the Canadian Government, both Conservative and Liberal, for much of his working life. His daughter Jacqueline, a graduate of U of T with an Honours BA in Political Science and Master of Arts, Global Media from American University of Paris, is following closely in his footsteps. After graduation she worked for the Jimmy Carter Presidential Centre democracy program in Atlanta, overseeing elections in the Ivory Coast, Democratic Republic of the Congo, Guinea and Tunisia and she is now assisting the Ontario Region of the Nature Conservancy of Canada with their communications.

Hugh Segal was politically inspired by a visit by Prime Minister John Diefenbaker to his Montreal High School in the early 1960’s. A graduate in Canadian History from the University of Ottawa, he was an aide to federal Progressive Conservative Leader of the Opposition Robert Stanfield in the early 1970’s while still a university student. At age 21, he was an unsuccessful candidate in Ottawa Centre for the Canadian House of Commons in the 1972 general election and again in 1974.

Segal was a senior aide to Ontario Progressive Conservative Premier Bill Davis in the 1970’s and 1980’s and was named Deputy Minister at age 29. He was Chief of Staff to Prime Minister Brian Mulroney from 1992 to 1993.

Segal finished second to Joe Clark after the first ballot of the 1998 Progressive Conservative leadership election, but chose to withdraw and support Clark (the eventual winner) in the second ballot runoff vote. Segal was summoned to the Senate of Canada in 2005 by the Governor General on the recommendation of Liberal Prime Minister Paul Martin.

His work in the Senate included chairman of the Senate Foreign Affairs Committee and Chair of the Special Senate Committee on Anti-Terrorism. He became the fifth Master of Massey College in December 2013 and is also a Distinguished Senior Fellow at the Munk School of Global Affairs.

Segal does not envy the “thirteen souls” currently running for the Conservative Party nor does he feel, based on history, that countries act fast enough to save peace and order. In his book, he stresses “the need for commitment to freedom from want and freedom from fear” in North America and abroad. In his book and in his remarks, he outlined “the ramifications of allowing these two freedoms to die or diminish”.